The company was established on September 5, 2016. The company’s goal is to solve ecological problems of pollution in cities of Kazakhstan and to ensure the transition to the green energy including transition to environmentally safe public transportation. Currently, electric transport is the best way of solving this task, since their emission rate equals zero.

In the recent years, replacing polluting diesel buses with electric ones became a mass trend in many countries that pursue the use of green economy. Government programs designed to increase the share of electric transport are run in the USA, China, Germany, the Netherlands and Norway. Electric buses cost 15-20% higher than the usual ones, but the operating cost is considerably lower due to cheaper maintenance and recharging.

“Owing to the developments in technology, the introduction of the Higer Quazar electric buses is an economically justified and reasonable solution of ecological problems in Kazakhstan,” said Yerlan Stambekov, the Chairman of Higer Quazar Supervisory Board.

Besides being the leading manufacturer of buses and coaches in China and the second in the world, Higer works in cooperation with the Swedish company Scania that develops the best energy conservation technologies for electric transport. As a result, Higer buses are equipped with one of the most effective batteries in the world.

The project was created by Parasat Scientific Holding; Parasat chose Higer Company, which produce buses in cooperation with the Swedish Company Scaria. Parasat and Higer entered into agreements for the joint construction of a plant in Almaty, as well as for technology transfer and cooperative scientific research. The second agreement is aimed at the cooperative scientific work of students and scientists in the development and design office of the company, which includes improving the existing technologies: the scientists will be looking for ways to increase the range and shorten the recharge cycle.  This will allow Kazakhs to continue the developments using their own science base.

The Chinese side owns 51 percent interest in the joint venture and responsible for the quality of the product. Within the framework of the project, the Chinese side signs over the patent on electric buses to Kazakhstan. Currently, the Almaty plant holds the exclusive license for Higer Quazar models throughout the CIS.

Quazar is the first and only electric bus that gained Transport Approval, ISO and VCA certification. Company’s products include an 8,5 meter bus for 58 passengers and a 12 meter bus for 110 passengers. Both models are capable of working under extralow temperatures down to -50ºC.

Apart from bus manufacturing, Higer Quazaralso also produces and installs infrastructure required for electric transport development. Such as a lineup of charging stations equipped with two access ports with China and European plugs. Stations are also equipped with displays for advertising content, automatic modules for credit card payment intake and five calculation modes. Quazar Company will install charging infrastructure at no cost, which should be a big boost to the development of the private electronic cars fleet in the cities. 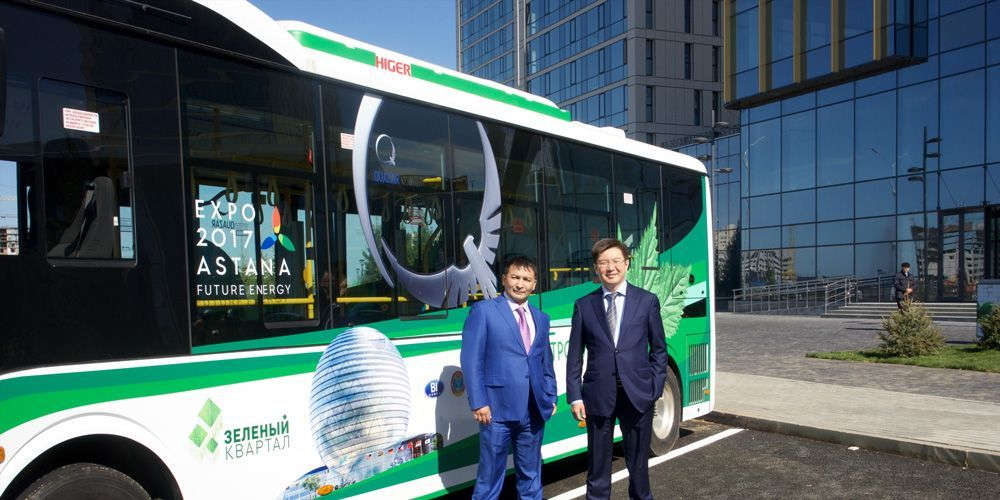 Scientific and Technological Center "Parasat" is the commercialization center of the leading technical university of the Republic of Kazakhstan. The main purpose of the center is to create and implement innovative projects that will introduce breakthrough technologies with the help of private investments and use of public-private partnership tools.

The main objectives of the joint venture

The venture puts emphasis on developing an integrated solution that will ensure the replacement of diesel buses with the electric ones in the cities of Kazakhstan within a short time. Apart from introducing new developments into design and construction of electric buses, the venture also develops and implements other innovative green energy projects.