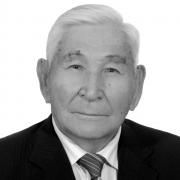 I entered Kazakh National Research Technical University (KazNRTU, earlier KazMMI, Kazakh mining and metallurgical institute) in 1954. The popularity of KazMMI from the point of training engineering personnel was the basis for the choice. The joy of dream materialization regarding the enrollment at university, the faculty that trained engineers was huge.

I chose "Metallurgy of Non-ferrous, Precious and Rare Metals" education program in connection with my idea of romanticism and importance of engineering at large nonferrous metallurgy enterprises. In 1959, after completing the course, I continued studying at the same place on the formed again "Automation of metallurgical processes" concentration program, which I completed in 1960.

The joy of dream materialization regarding the enrollment at university, the faculty that trained engineers was huge.

Whom I remember the most from the teachers? I think Konstantin Vasilyevich Sushkov that conducted "The theory of metallurgical processes" discipline and Abdesh Kuramayevich Bedelbayev whose subject was "Automatic control theory".

While studying, I investigated soda electric smelting process (K.V. Sushkov was the research supervisor), during my internship, I participated in trials as a shift engineer. Accordingly, my thesis was dedicated to the given theme.

After graduation, I intended to continue my study and scientific researches in a postgraduate study. KazMMI management made a decision to send me to employer-sponsored graduate program at Moscow institute of steel and alloys. In 1964 I defended Master's thesis on "Research of blast smelting of oxidized nickel ores by means of mathematical model" at the given institute, and in 1972 the doctoral thesis was defended as well; I was rewarded Doctor Degree of Engineering on "Optimal control of smelting of ores and concentrates of nonferrous metals in shaft furnaces".

After completing the employer-sponsored graduate program, I started my career at Kazakh Polytechnic University (KazPTI) with the position of a senior engineer. In 1976-1985, I was appointed as Rector of KazPTI named after V.I. Lenin. Under my leadership and participation there was developed and implemented scientific, methodical and regulatory base of management of higher educational institution with the purpose of training and carrying out research works in the form of Comprehensive System for Quality Management of Specialists Training (CSQMST) in modern approach context related to project management (development). A silver medal at Exhibition of Economic Achievements in Moscow noted the mentioned work in 1985. KazPTI got Labor Red Banner award, also, the institute was repeatedly recognized as the winner of socialist competitions in the USSR and KSSR, and was included in the number of USSR leading higher educational institutions.

KazPTI got Labor Red Banner award, also, the institute was repeatedly recognized as the winner of socialist competitions in the USSR and KSSR, and was included in the number of USSR leading higher educational institutions.

It is worth mentioning that due to my active participation there were organized Almaty Architecture and Civil Engineering Institute and Rudny Industrial Institute, scientific and methodical base and activity management bases of republican Council for students’ scientific research as well, it resulted in the base of holding All-Union measures on students’ scientific research in Almaty. I was assigned the deputy manager of "Mathematics and Mechanics Institute" under RK Academy of Science and was elected as the corresponding member of RK Academy of Sciences in 1989.

Under my direction and active participation there were created Information science and management Institute of RK Academy of Sciences (currently Institute of Information and Computing Technologies under RK MES Science Committee) in 1991. In 1991-1994, while I was in charge of the given institute, I carried out the work related to the new institute foundation, development of its scientific agenda and collective orientation to fundamental tasks solution in information science sphere, theoretical and applied aspects of management as well.

By the resolution of RK Cabinet, I was designated as the highest certifying commission chairperson in 1994 (since 1995). At the same time, I was an academic adviser of Information Science and Management Institute. Since 1997, I have managed System analysis and management laboratory under Information and Computing Technologies Institute under RK MOS Science Committee.

In 2003, I was elected as the full member of RK National Academy of Sciences. Since 2009 until present, I am the head of "Theory of Parametrical Regulation of Market Economy Development" scientific direction, the results of which are at the junction of dynamic systems theories, differentiable mapping, information technologies and macroeconomic theory. In total, I published more than 460 scientific works (monographs – 22, patents – 15). Under my academic supervision 44 candidate dissertations were successfully defended, I was in charge of 10 applicants’ works for doctoral degree as an academic adviser.

The specialization of the metallurgical engineer of non-ferrous, precious and rare metals gained in KazMMI and specialization in automation of metallurgical processes were a starting step to the theory world and practice of information technologies and a basis for successful performance related to my future functional duties at different positions.

In the number of the most necessary personal qualities in my activity sphere, I would like to mention the system approach to any issues and tasks. Higher educational institution with its own academism laid this foundation and fundamental nature regarding personnel training that in the future took shape and became the leading factors in my work. I tried to impart these qualities being already a teacher at modern KazNRTU.

In the future, I see Satbayev University as the university with a world-rating indicator on engineer training from the point of fast developing requirements of digitalization.

To be a professional, they must possess such qualities as creativity and discipline, and master a separate discipline to perfection, must obsess integration of knowledge, abilities, skills and advancing entry into spheres of tasks, and problems of professional activity.

I want to say to freshmen, "You have chosen worthy higher educational institution that will empower to embody your dream to be an active creator of your future in the contemporary society!"