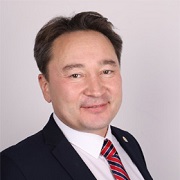 Chairman of the Board – Rector 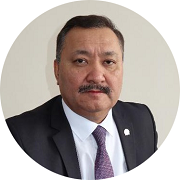 Doctor of Technical Sciences, Professor, Corresponding Member of the National Engineering Academy of the Republic of Kazakhstan and the International Engineering Academy (Moscow), Academician of the Kazakhstan National Academy of Natural Sciences and the National Academy of Sciences of Higher Education, National Expert in Science, National Expert in Accreditation. He held senior positions in the higher education system of RK. 2017-2021 held the position of Rector of Karaganda State Industrial University. Awarded by medals, certificates of honors, and departmental awards: including the anniversary medal "25 years of the Constitution of the Republic of Kazakhstan", "Honorary Worker of Education RK", "For special services in the development of science", "Honored Energetic RK", the golden badge of A. Baitursynov Association of Higher Education Institutions of RK, "Belsendi qyzmeti ushin" (Active Service Medal) of "NurOtan". He has gratitude letters from President RK- K - Zh. K. Tokayev and First President Elbasy of the Republic of Kazakhstan N.A. Nazarbayev. The holder of the grant "Best teacher of the university - 2010". Author of more than 200 publications, including four monographs, 11 teaching aids, more than 80 educational and methodological developments, 35 authorship certificates, and patents. Нe is a member of «NurOtan». 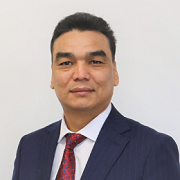 Governing Board member – Vice-Rector for Corporate Development and strategic planning

A well-known scientist, mining engineer-geophysicist. Candidate of Technical Sciences of RK and RF. Associate Professor, Academician KazNAEN, Corresponding Member of NIA RK. Author of more than 100 scientific works, including 80 articles, including 12 articles in scientific publications indexed by Web of Science (h-index - 2) and Scopus (h-index - 3) databases, 3 patents of the Republic of Kazakhstan, 2 monographs, 5 teaching aids, and 20 teaching and methodological aids. Winner of the grant of the First President of the Republic of Kazakhstan - Leader of the Nation N.A. Nazarbayev and the President of the Russian Federation V.V. Putin. Has honorary badges «Honorary Worker of Education of the Republic of Kazakhstan», «For Services in Development of Science» RK MES, Medal «For Contribution to Development of Oil and Gas Complex» RE ME, RF Order of Merit in Education, the title «Honored Scientist», the award «Star of Scientist» of the International Academy of Ecology and Safety of Life of the UN, Laureate of the prize and winner of the medal «Young researcher» of the Union of Scientists of Kazakhstan, Laureate of the State Scientific Scholarship for young talented scientists of MON RK, as well as other awards and medals. He took courses for leaders of higher education of the Republic of Kazakhstan at the University of California "Berkeley Institute on Higher Education", Berkeley, USA, courses for leaders of higher education in JSC «Nazarbayev University Graduate School of Education», «Eurasian Higher Education Leaders Forum», Astana, management of higher education in Slovak Technological University, Bratislava, Slovakia, on the «TEMPUS» project, etc. 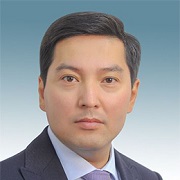 Member of the Managment Board, Vice-Rector in Charge of Research and International Affairs

He was born in 1980. He has PhD. He is a graduate of «Bolashak» program and defended a master’s degree at the University of Southern California, US. He started working in higher education. In 2012 he entered the civil service and at various times worked in the apparatus of the Parliament and the Ministry of Education and Science of the Republic of Kazakhstan. He has more than twenty scientific publications and monographs. He is married and raises a son and a daughter. 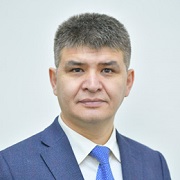 Governing Board member -Vice-Rector for social and cultural development

A senior manager. Master of political science, master of public administration. He occupied a number of positions in the apparatus of RK Parliament Mazhilis as well as Central state bodies of Republic of Kazakhstan. He was in charge of a number of departments at RK Education and Science Ministry. For 9 years, he was engaged in youth policy issues, in implementing the youth initiatives and supporting for civil actions. He is a graduate of Bolashak Presidential Program. 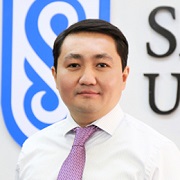 The Chief of Staff 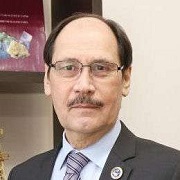 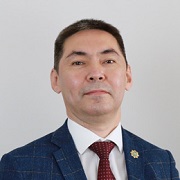 Director of Mining and Metallurgical Institute named after O. Baikonurov

He is a mining engineer-surveyor, candidate of technical sciences. Besides, he is an academician of RF Academy of mining sciences, academician of International Computerization Academy, academician of National mining Academy of Kazakhstan, member-correspondent of International Academy of ecology and life safety of the Russian Federation. In different years, K. Rysbekov worked as Director of Mining and metallurgical Institute, a member of the Expert Council of the Committee for control in the education sphere and science RK MES, was the owner of the State scientific grant for young talented scientists. He is the author of more than 100 scientific papers, 3 textbooks, 3 monographs, and 7 study guides; a member of the sections for expert and analytical evaluation of works submitted for State prize of the Republic of Kazakhstan in the field of science and technology named after al-Farabi. Freelance expert of professional standards at the "Republican Association of Mining and Metallurgical Enterprises". 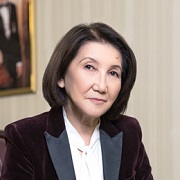 Professor, Doctor of technical sciences. She graduated from mechanics and mathematics faculty at Kirov Kazakh State University (now Al - Farabi Kazakh National University), worked as a mathematical engineer at Alma-Ata Design Bureau under USSR MIC. R.K. Uskenbayeva worked her way up from a researcher to the department head. In 1993, she defended her candidate thesis on “Automation of technological processes and production” specialty. She completed her doctoral studies at KazNTU named after K. I. Satbayev. After completing her doctoral studies, she occupied the position of the head at Computer Science Department. In 2005 on her initiative, the department was renamed as "Software systems and networks" department. R.K. Uskenbayeva defended her doctoral dissertation on "Mathematical and software support of computing machines, complexes and computer networks" specialty at L. N. Gumilyov Eurasian National University. In March 2012, she assumed the position of Vice-rector for Academic Affairs, then worked as Vice-rector for academic and educational activities of International University of Information Technologies. In 2019-2021, R.K. Uskenbayeva held the position of Rector at IITU. 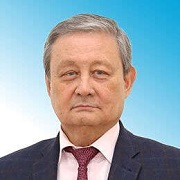 Director of Architecture and Construction Institute 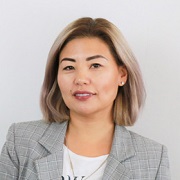 Mining engineer-geologist, PhD, lawyer. An experienced researcher, a teacher with extensive international experience. She has completed scientific internships at Natural History Museum (London, UK) and Siberian Branch of Russian Academy of Sciences. Amralinova B.B. participated in "36th Annual Winter Meeting 2-4 January 2013 University of Leicester" international scientific and practical conference (Leicester, UK) and "37th Annual Winter Meeting 2-4 January 2013 University of Oxford" conference (Oxford, UK). She is the author of more than 20 methodological guidelines in Kazakh and Russian, about 10 courses of lectures. Over the past three years, she has more than 10 certificates for advanced training as well as more than 30 scientific publications, including in rating journals. Amralinova B.B. is the head and executor of state budget projects in the field of rare metals geology. She is the author of «Types of gold deposits in East Kazakhstan" monograph (2015) and textbooks. 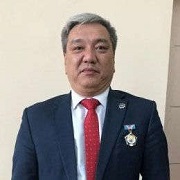 He is a scientist involved in the issues of technological machinery and equipment, and he is a teacher who has twenty years of teaching experience. He was awarded "Excellence in Mining Science" honorary badge and the 3rd degree "Miner’s glory" departmental badge. He is the author of four tutorials, three innovative patents and five publications with a high impact factor included in Thomson Reuter, Scopus databases. He is the head of PTF scientific theme and the leading researcher of a number of innovative projects on grant financing. Yelemessov K.K. is the author of both "Operational and Service Engineering" program and the concept of students’ professional accreditation introduced into the work in cooperation with the industrial Association of RK mining and metallurgical enterprises. He is the creator and chairperson of Industrial Advisory Committee with AMME involvement. He is an expert in professional standards at ALE “Republican Association of Mining and Metallurgical Enterprises”. 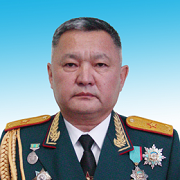 Head of the Military Institute 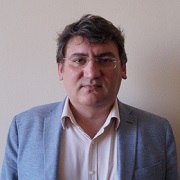 Director of the Institute of Distance Education

Simonov Andrey Gennadyevich is an expert in distance education, IT development, energy efficient construction and design. He became one of the youngest heads of IT department, during his work in RSE "Statistics Agency" he supervised the construction of a centralized republican local network and training of IT-specialists of regional centers. During his work as Executive Director in EST Group he implemented several projects on LEED/ BREEAM certification and mathematical energy modeling at the facilities "Zeleniy Qvartal", "Izumrudniy Qvartal", the UAE Embassy and Consulate in Astana. During his work in "STC KBTU" he managed the construction, design, administrative and marketing departments, managed communication with customers. He managed the development of the project "Multifunctional Complex PE&IT KBTU", within the framework of which the "Drilling Center KBTU", "Photoelectric Station" and "Training Workshop of Kazakhstan Marine Academy" were built. The Training Workshop became the world's first autonomous building with a working machine room with an installed marine engine in the steppe and the first industrial building in Kazakhstan with proven energy efficiency characteristics. At Satbayev University Andrey Gennadyevich manages the development and operation of PolytechOnline, one of the best distance learning platforms in the country, improving the efficiency of the university with the use of intelligent data analysis tools within the Data Center, organizes mentoring for students in the areas of Data Engineering, Data Analytics.