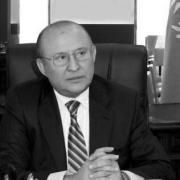 I was born in Alma-Ata. After finishing the secondary school # 75, in 1967 I entered the Kazakh Polytechnic Institute named after V.I. Lenin (KazPTI), the Faculty of Civil Engineering.

What was my choice connected with? When I studied at school I knew for sure that I would study at a technical university, as I was interested in the exact sciences - Mathematics and Physics. I achieved the certain success in this field. In my school days I was lucky to see the unique architectural buildings of Turkestan, Bukhara, Samarkand, Moscow and Leningrad which made a deep impression on me. In those years the intensive construction was begun in Alma-Ata as well. This fact predetermined my choice of the profession as a builder.

In my school days, I was lucky to see the unique architectural buildings of Turkestan, Bukhara, Samarkand, Moscow, and Leningrad.

In 1972 after graduating from the Institute with honors I was left to teach at my native university - at that time there was a shortage of teaching staff in the country. After two years of work on the recommendation of administration and professors of the Institute I was admitted to the full-time postgraduate study at the Moscow Civil Engineering Institute named after V. Kuybyshev (now the National Research University “Moscow State University of Civil Engineering”). On completing the postgraduate program, I defended my dissertation in support of candidature for a technical degree and later on - Doctor of Science.

In the following years, I was Head of the department, Dean, the consultant on the World Bank project in Kazakhstan, lectured and supervised the course at the Academy of Public Administration under the President of the Republic of Kazakhstan.

In 2004, according to the results of the competition, I was elected as a Rector of Shakarim Semipalatinsk State University. In 2008, by the Presidential decree of the Republic of Kazakhstan N. Nazarbayev I was appointed the Rector of the Kazakh National Technical University named after K.I. Satpayev. At that period for the first time in the history of modern Kazakhstan, rectors of the leading national universities were appointed by the direct order of the President of RK. This is an evidence of the special and close attention of Head of the state to the system of higher education and science of the country. At the same time, this imposed on us a huge responsibility for the trust placed in us and for the results of our activities as the University leaders.

During my work as the rector KazNTU since 2008 till 2015 I consistently implemented the following principles:

- learning through the science and innovations;

- social responsibility to the society.

In my activities I paid the special attention to the teaching programs, development of new specialties and upgrading the facilities.

In those years, particularly at KazNTU named after Satpayev there were established:

1. The national research laboratory for the collective use of information and space technologies, where the most powerful supercomputer in Kazakhstan with a peak performance of 80 Ttps was installed and which entered the TOP-50 of the CIS.

2. The laboratory of engineering profile, equipped with the most advanced analytical facilities.

3. The Kazakh-Korean Training Center for Information and Telecommunication Technologies.

4. The Kazakh-French Center for training specialists in the energy and automated control systems.

6. The joint research and educational centers of the leading world companies Apple, Siemens, Leica, Honeywell and many others.

All these measures allowed fulfilling the order of the President of RK. Under my direct supervision, based on the KazNTU and the Scientific Holding Company “Parasat”, the largest research-educational and innovative-manufacturing complex in the field of engineering and technology — the Kazakh National Research Technical University — was founded in Kazakhstan.

On my initiative the non-commercial JSC “KazNITY”, by the Decree of the President of RK was included in the list of universities with a special status, as well as the fact that the Head is appointed and dismissed by the President of the Republic of Kazakhstan.

Under my direct supervision, based on the KazNTU and the Scientific Holding Company “Parasat”, the largest research-educational and innovative-manufacturing complex in the field of engineering and technology was founded in Kazakhstan.

Alongside with the pedagogical and organizational activities, I ran a large scientific work. I was the supervisor of three targeted scientific- technical programs, made the reports at the international conferences and seminars. I was elected as a Chairman of the Earth Sciences Division, Vice-president of the National Academy of Sciences of RK, a member of the Scientific and Technical Committee under the Government of RK, a foreign member of 6 Academies. In addition, I was awarded many state awards of the Republic of Kazakhstan, Russia and France.

I believe that thanks to the fundamental knowledge gained at the Institute, the legendary Polytechn and also adhering to the principle of "lifelong education" I have achieved the great success in the scientific, pedagogical and management activities.

I am sure that Satbayev University alumni will proudly and honorably thank their Alma-mater and contribute to the prosperity of our independent Kazakhstan. The future of the country is yours!