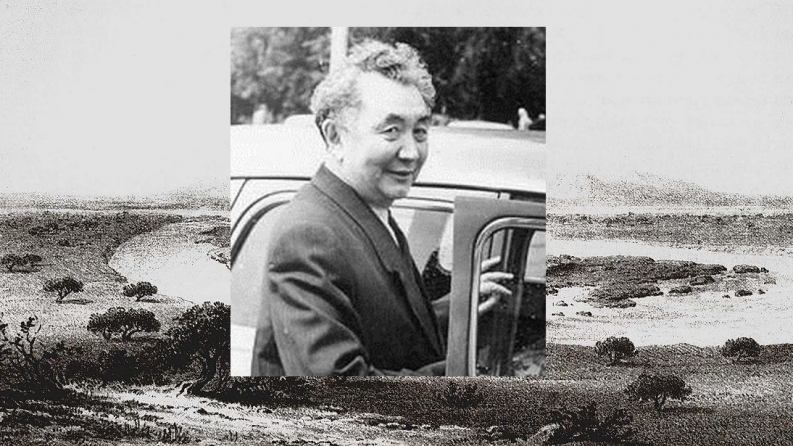 This year is the 120th anniversary of the birth of Kanysh Imantayevich Satbayev, the great son of Kazakh steppe: the first compiler of the school Algebra textbook, the first professional mining engineer among the Kazakh people, an outstanding geologist, founder and first President of the Academy of Sciences of Kazakhstan, the first laureate of the State Prize in Kazakhstan, a major science organizer, state and public figure. This anniversary date is inherently combined with the 85th anniversary of the Kazakh National Research Technical University named after K. Satbayev, celebrated this year, since it was at the Mining and Metallurgical Institute that K. Satbayev initiated the creation of higher professional and engineering education in Kazakhstan.

The greatness of academician K. Satbayev as a man of high erudition, who possessed encyclopedic knowledge in many fields of science, an outstanding organizer of scientific activity and the attraction of advanced scientific personnel, consists primarily in giving the country an intellectual, scientific development trend that transformed Kazakhstan from enlightened to intellectual scientific and professional society. The steps taken under the leadership of K. Satbayev laid the foundation for today's innovative and scientific potential possessed by our people, our youth and our country.

Today we do not think about what a qualitative leap in the development of the country it was and what vector it gave to the development of the country. But then, by the mid-1930s, Kazakhstan was a literate and enlightened society, but the training of any professional engineering personnel was carried out in the Russian Federation or Uzbekistan, and science was preserve only  for visitors from Moscow and Leningrad scientists.

Since 1927, a young professional mining engineer Kanysh Satbayev began his professional activity at the Karsakpaysky copper mine, with no local professional staff, a lack of funding, and the remaining scientific equipment from the British concessionists. After 3 years by the beginning of 1930, scientific evidence were found that several of its separated copper deposits discovered by its group are one large Dzhezkazgan copper deposit, the largest in the world with reserves of at least 2 million tons of copper. Later his first fundamental scientific article “To the Problem of the Great Dzheskazgan”, National Economy of Kazakhstan, 1936, No. 1-2, p. 74-83 was published. It chaned the face of Central Kazakhstan and our country for the next century, the way you see it now. The discovery of Greater Dzhezkazgan was and still stay for young people is an example of a professional, scientific approach to the realization of a practical task. And then in the Karsakpay, village, K. Satbayev followed an exact and scrupulous analysis of scientific facts and artifacts using the best available means of research and analysis thousands of kilometers distance from civilization and throughout the rest of his life.

“The reserves of Dzheskazgan as of January 1, 1935 are expressed in all categories of 3220 thousand tons of copper, of which 1330 thousand tons by category A2 + B. The average copper content in the A2 + B category is 1.92%. Even now, these figures put Dzheskazgan in first place in the Union in terms of the number of proven reserves. But these figures do not exhaust the possibilities of Dzheskazgan. It is enough to indicate that an area of less than 2 square km from 40 square km of presumed ore-bearing area was covered by drilling intelligence. Only the upper 150 m. from 700 m. of productive Zhezkazgan Formation have been described by drilling, and only one well has been drilled to a depth of 300 m, having discovered a horizon of industrial ore at a depth of 230 m.
The potentialities of Dzhezkazgan is immensely large and, perhaps, can be equated to copper deposits in Central Africa, namely in Northern Rhodesia, which is currently the largest copper deposit in the world,” - wrote K. Satbayev. A stunning sense of individual scientific facts to made an analytical synthesis turned him into a great scientist - “Big Dzhezkazgan is not the only object. Within the Dzhezkazgan region there are quite large reserve iron, iron-manganese ores, which allow to plan the extraction of these ores on a large scale”- this will play a key role in preserving the Union's steel industry during the Second World War.

With the start of financing the development of Dzhezkazgan - the construction of a copper smelting plant, a reservoir and the laying of a railway, prerequisites arose for creating the first higher technical educational institution in the country - the Kazakh Mining - Metallurgical Institute (KazMMI), better known to everyone in the country as Polytech (now the Kazakh National Research Technical University named after K. Satbayev). The institute has become a forge of its own professional personnel, including for the growing mining, metallurgical and geological industry of the country. This vector of professional training of senior engineering personnel laid 85 years ago at the KazMMI provided the country's needs for professionals and became the backbone of the formation of the first Kazakh scientific personnel.

The sequence of K. Satbayev in the formation of the engineering, intellectual and scientific elite of the mining and metallurgical sector is the most important standard of his organizational skills and foresight. Consecutive steps allowed to create the first Kazakh scientific center on the basis of the Institute of Geological Sciences in 1940, then extend it to related areas to create an academic branch of science and later form the first Kazakh National Academy of Sciences in 1946.

Systematic and extensive research using the most advanced technical tools in the vast territory of Central and Eastern Kazakhstan, conducted by scientific groups of Kazakh geologists under the guidance of K. Satbayev, prompted him to analytic systematization of geological maps of Kazakhstan in the early 1950s. Therefore, in 1955 his next fundamental scientific work “About the methodology, actual base and main conclusions of metallogenic forecast maps of Central Kazakhstan” The News of the Academy of Sciences of the Kazakh SSR. Geological series, 1955, vol. 20, s. 3-35. was published. "Complexity in the scientific development of the issue, completeness in the collection of all primary facts of observations, concreteness in their analysis, objectivity in generalizations and collectivity in creativity are those methodological principles that become guiding aspects in the implementation of works on the compilation of metallogenic forecast maps of the most important minerals within the Central Of Kazakhstan ”- writes K. Satbayev. By the example of scientific activity (doubt everything and trust only the facts) by the scientific and academic debate and discussion, by the synthesis and analysis of scientific material, academician K. Satbayev and his scientific associates have established a solid quality standard of Kazakhstani science, which is relevant today. He further writes - “If we try to give a concise definition of the essence of this method, which was developed and applied by us in the preparation of metallogenic forecast maps of Central Kazakhstan, we can briefly define it as a complex-geological method of regional metallogeny. Being the result of a concrete analysis and objective generalization of the data of the entire complex of accumulated actual geological materials, the predicted metallogenic maps compiled using such a complex geological regional-metallogenic method provide truly objective, and thus the most reasonable answers to the questions about what and where it is necessary to search for the modern stage of geological studying within Central Kazakhstan.”

Scientific prediction, extrapolation and forecasting of data using the first systematized metallogenic maps of Kazakhstan made it possible for several decades to successfully discover new rich deposits of metallic ores. Systematization of disparate factual regional data into a single integrated geological map of Central Kazakhstan allowed K. Satbayev to make fundamental and universal scientific statements about the patterns of spatial location. It is surprising that these scientific statements were made long before the era of numerical mathematical calculations and computer simulations of data, but have now been fully confirmed. These fundamental scientific statements are most fully formulated in his other scientific article “The main regularities of the spatial distribution of zones of endogenous ore mineralization in Central Kazakhstan” Soviet Geology, 1957, No. 58, p. 93-109. “The results of a specific analysis of endogenous ore mineralization in Central Kazakhstan with the immutability indicate that industrial ore deposits in its territory were formed only where all three arguing factors of ore genesis were present. In particular, for Central Kazakhstan, there were the most favorable cases when deep regional faults and the fledged and coordinated systems of fracture zones accompanying them have nodes of mutual articulation or intersection. At the same time the places of conjugation with their fan-shaped converging brachy-folded structures, which are composed of sharply anisotropic, initially layered rock complexes, are especially important. It is very significant that metal-bearing solutions of deep-seated magma chambers contemporary were available in these places”.

The scientific conclusions made by K. Satbayev and reflected in the above work crown the talent and genius of a geological scientist, and the scientific propositions formulated by him are widespread in the scientific geological world. K. Satbayev postulates: “Such a predominant spatial confinement of skarn and hydrothermal metallogenic formations only to well-layered complexes of rocks with well-defined structural interfaces between different species in their physical properties, in which any kind of disjunctive disorders are most readily formed, is one of the most universal laws of spatial distribution of endogenous metallogenic formations not only in the context ditions of Central Kazakhstan, but also throughout the world. " Guided by the postulated scientific position and research of other scientists on the Mining Altai deposits, K. Satbayev summarized research on the integrated use of non-ferrous metal ores for East Kazakhstan, which are reflected in his scientific work "Studies of the Academy of Sciences of Kazakhstan on the integrated use of non-ferrous metal ores" Vestnik An Kazakh SSR, 1962, №12, pp. 3-11.

The main merit of Satbayev to the country and the people of Kazakhstan is his great contribution to the development of geological research. It is well known that the development of the country's largest copper and manganese deposits began under his direct supervision. But most important of all is his role in the qualitative reincarnation of Kazakhstan from an agrarian-educational to an industrial-scientific intellectual country. The contribution of Academician Kanysh Satbayev to the imposition of scientific culture and methodological approaches in science, which are an example for systematized research work for current generations of scientists in Kazakhstan and young people interested in science, is invaluable. On the eve of the 120th anniversary of the birth of our great compatriot, it is important to recall once again his invaluable contribution to the development of the country, scientific thought and the formation of a new innovative consciousness of the nation - Rouhani Zhangyru! 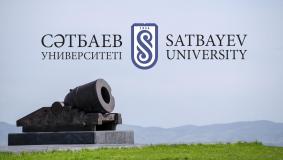 The list of enrolled students to Military Department in September 2021 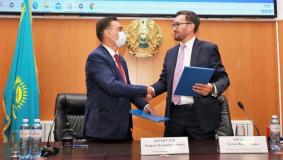 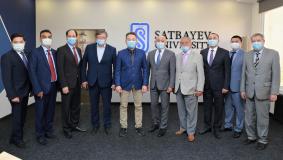 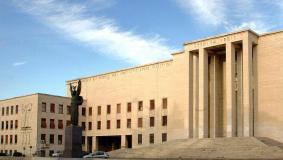