University students cannot just participate in events, but also become organizers of city, national and international scale events! That is why the student years at Satbayev University are a time of discovery, new knowledge and acquaintances, bright emotions and finding a strong friendship for many, many years.

Numerous public, scientific, creative and sports associations, clubs and collectives, bright student holidays, informative forums and conferences are waiting for Satbayev University students. Every year in September, a “Student organizations’ fair" is held, during which everyone can open and present their community or join the community that they liked.

Student Council of dormitories is a student organization responsible for organizing the life and leisure of students who live in dormitories. Presidents of student councils help students adapt to new conditions, hold student events.

Youth Affairs Committee is a student organization whose members promote national values by organizing the events such as "Bauyrsak Day", "Korissu", as well as meetings with famous people. The team actively promotes sports and conducts image events.

ENACTUS Satbayev University is a community of business leaders who see business as a way to solve social issues. Enactus students implement socio-economic projects that allow people to improve their lives. Teachers and business partners of Enactus guide students and become mentors of teams. Students present their projects in annual competitions, which are evaluated by business leaders.

SPE (Society of Petroleum Engineers) is a non-profit association of oil and gas industry professionals. It unites more than 158 thousand members from 143 countries of the world, who are in 200 professional and 379 student departments. SPE at Satbayev University, the largest department in Kazakhstan and one of the leading communities in Russia and Caspian region, which includes more than 1,000 students, holds special events aimed at improving the students' knowledge in oil-gas field and general broadening of horizons, opening the English language and eloquence, public speaking clubs, debates, "oil" games for students, intellectual competitions etc. Caspian Petro Congress is held annually by the community on the basis of Satbayev University, the given Congress unites leading specialists in the oil-gas sector and promising students as well.

Debate clubs. Debates are an intellectual game, which is a special form of discussion that is conducted according to certain rules. Debates develop logical and critical thinking, develop skills of communicative culture and public speaking, prepare for independent decision-making, contribute to the formation of personalities as future leaders of society. Today, two debate clubs are active at Satbayev University: Intellectual Debate Club «Technokrat» (Kazakh league) and Intellectual Debate Club «Satbayev» (Russian league). Every year our students conduct a republican debate tournament for Satbayev University Rector's Cup and participate in various city and republican tournaments, in which they traditionally win, thereby protecting the honor of the university.

KVN (Russian League) and Zhaydarman (Kazakh League). A humorous game during of which the teams compete in humorous answers to questions asked, improvisations on given topics, acting out pre-prepared scenes and performances, etc. Since 2012, Satbayev University has held an annual contest among institutes for Champions Cup. The winners of the given competition represent the university in national and international leagues, such as "BAS LIGA", "Zhaydarman", the highest KVN league, etc. 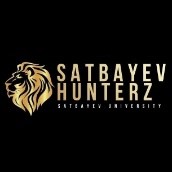 «Satbayev Hunters»
The organization’s mission is to agitate among entrants in order to attract them to Satbayev University, organize excursions and events for future entrants and first-year students. We can say that this is the face of Satbayev University.

Satbayev Time is a student project that is engaged in educating the university students related to student life, spreading important information on various events, both beyond and outside the university with the purpose to gather a large audience of students, for communication in social networks of Satbayev University’s entrants and graduates as well.

Center for Creativity coordinates the work of university circles and ensures the holding of events that are conducted at the university and outside it. The center has an orchestra of folk instruments, a vocal and choral circle, a choreographic ensemble, a vocal and instrumental ensemble, a club of cheerful and resourceful "Zhaydarman", Stand-Up, which are led by the experienced leaders: Honored Workers of the Republic of Kazakhstan, Laureates of international and republican competitions, Champions of republican games, etc.

Sections of the sports club

Make a robot yourself

The future of automation

Event club in English. It holds a traditional English week.

Lectures on "General Geology" discipline in schools-lyceums of Almaty

The program of professional orientation at Satbayev University begins from the moment the student enters the university in the form of numerous competitions, production practices, et cetera. The university has 460 agreements with partner companies, 65 of them with subsequent employment.

At the university, there are many programs aimed at the vocational guidance of students and the formation of their survival skills in the world of business and production. So, the student community Be Smart in Business has become a platform for meetings of students with high potential, with leading employers. This helps students to prepare for work and get practical experience, and companies - to find the best employees.

In 2017, the University launched the "Success Laboratory" project, designed to give students the skills to find work and communicate with employers. The project is a series of online master classes from leading market professionals on CVs, etiquette norms, interview behavior and the development of other necessary skills.