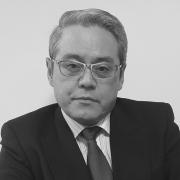 I entered Kazakh National Research Technical University (KazNRTU, at that time Kazakh Polytechnic Institute named after V.I. Lenin) in 1976 right after the graduation of high school in Karaganda. Since school years, I had been engaged in radio engineering and electronics therefore there was no problem with institute choice. Moreover, Alma-Ata is my native city: right here I was born in 1959. Besides, my father Akhmetov Faraby Ilyassovich was the graduate of Kazakh Mining and Metallurgical Institute, and I felt in a certain sense, the heir and successor of the dynasty.

I entered the institute on preferential set so I passed just a part of entrance exams, in the result there was on offer for me to go to Moscow State Technical University named after N. Bauman. Of course, it was honorable and exciting but when I realized that studying is possible only on mechanical engineering, my joy was replaced by disappointment: after all, there was a wish to be engaged in the thing that was interesting, i.e. electronics and its applications. I refused to study at the leading technical university of the USSR and chose "Automation and Telemechanics" educational program in "Automation and computer engineering" faculty of KazPTI.

I refused to study at the leading technical university of the USSR and chose KazPTI.

Remembering years of study, the list of the taught disciplines, wonderful teachers who shared with us the special knowledge and life experience, it is hard to say exactly which of the disciplines my favorite one was. Since childhood I was keen on electronic engineering, strict logicality and substantiality of different sections of higher and applied mathematics, programming that was intensively developing and actively filling real life, a number of disciplines teaching the bases of object management of  different nature – from technical to social ones. The crucial thing was actually all disciplines were useful at some extent in the next years; I am currently continuing studying some of them in daily professional activity.

As for interpreting and studying the majority of disciplines, I almost did not have problems. However, most of all time was required for preparing graphics tasks on descriptive geometry that was not a pleasant work for me. Students of our specialty gained knowledge and skills on a quite broad set of disciplines: from descriptive geometry and chemistry to social sciences and foreign languages as well.  Such is the lot of specialists in automatic and automated control systems - a wide variety of knowledge is required in future work.

Our generation was very lucky with the teachers. All of them were mentors with capital letters, highly professional specialists, real intellectuals, spiritually rich people with wide life experience and sincere aspiration to impart the knowledge to students. It would be desirable to note several names who scarred especially my memory and influenced my forming as the specialist and the person; Gulnitsky L.V. (physics), Medvedev V. A. (English), from "Automation and telemechanics" department Syzdykov D.Zh., Brichkin L.A., Arkhangelsky, Tokhtabayev S.M., Sokolova S.P. and Kadyrbekov S.O.

Our generation was very lucky with our teachers.

During the studies I constantly was engaged in research, as well as participated in development related to projects on commercial contracts, made reports in conferences of republican and all-Union (it was the USSR time) level. At the university, everything started from the time when I was involved in “Pribor”, students’ design office (SDO) under the wonderful teacher’s leadership L.A. Brichkin. There we developed an ingenuios electronic equipment and made experiments. Later I participated in development of mathematical and software of technical objects management systems in the construction, metallurgical and oil industries within realizing the economic programs at "Automation and tele mechanics" department under D.Zh. Syzdykov’s supervision.

My diploma paper, which I successfully defended in 1981, was connected with methods development of the so-called modal management of technical objects, in particular, process of hot rolling on 1700 camp at Karaganda iron and steel plant. Ensuring required dynamics of automatic control process of this complicated object was the purpose of the given work. In the diploma, there were used the results of my two-year research of the target department based on the agreement with Karaganda iron and steel plant. The same topic was developed in my candidate dissertation that I defended in 1989 at "Automation and telemechanics" department in KazPTI where I continued my employment after graduating from the university. The candidate dissertation was executed on a joint of 2 scientific specialties: "Management in technical systems" and "Automation of technological processes and productions". Therefore, by the time of university graduation, I had a strong desire to continue the scientific activity, finally I made my desire carry out, and the made by me choice, in my opinion, was correct.

After university graduation, I stayed at "Automation and telemechanics" department and worked for 12 years there as an engineer, junior researcher, teacher and associate professor. Certainly, knowledge and skills received during my study, understanding and support from the side of colleagues - my former teachers - helped not just to get the job but also to work fruitfully.

Knowledge and skills, as well as support and understanding from my former teachers helped me to work fruitfully.

In 1993, I left for Japan, having received a grant of Ministry of Education of the given country to participate in one-and-a-half-year program of joint researches with the Japanese Higher educational institutions. However, my cooperation with Japan is going on, 25 years later after leaving Kazakhstan.  I have dealt with scientific applied studies, worked for several universities and the large companies in the field of information communication systems. In 1999, I defended the doctoral dissertation at Muroran Institute of Technology (Muroran city, Japan).

Kazakhstan in general is at the initial stage of development of modern information and other technologies, which, as we know, require the availability of material and technical resources. Nevertheless, a person has been and remains as a key factor in engineering sphere; for that, they must be competent, able to conceive in a creative way; also, they are to be comprehensively educated experts with a broad outlook and passionate desire to learn and improve the world, and ready to overcome obstacles of any type.

I would like to address my younger colleagues and say the following: “Closely monitor the changes that are taking place in the world, in the country and in society. Try to analyze the events and constantly be adapted to new conditions. Engineering, as philosophers teach us, is a link between the nature and society. Be patriots in a broad sense, appreciate and love sincerely your Homeland, your home and family, friends, university and your specialty …”