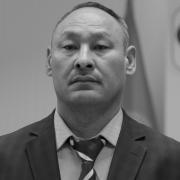 Head of the corporate security department of LLP “ANPZ”

In the 80s Kazakh Polytechnical Institute (KazPTI) was considered as one of the most prestigious universities in the USSR, where highly-qualified engineers were trained for oil and gas industry and other fields of government economy. Perhaps, KazNRTU named after K.I. Satbayev plays a significant role within the country and in the post-soviet territory. That’s why in 1984, after graduation from the secondary school in Guriyev (now Atyrau city), I went to Almaty to enter the Polytech.

I was proud of choosing this institute and I felt the perspective of self- realization as an oil and gas employee, I was delighted to have an opportunity to make a contribution in the future into the development of our country. In addition, I chose a new faculty of “Hydrogeology” which was found at that time, specialty – “Hydrogeology and Engineer Geology”.

In my point of view, studying at university gave me the opportunity to comprehensively study the problem of lack of fresh water for agricultural land in the Atyrau region, to take part in the development of hydrocarbon deposits, soil and artesian basins, the construction of industrial facilities.

KazNRTU named after K.I. Satbayev plays a significant role within the country and in the post-soviet territory.

The study was conducted only in Russian, which presented certain difficulties for a few students who arrived from the countryside and abroad. In my group “RG-84-1”, along with students from Kazakhstan, there were students from different post-soviet countries and seven Cuban citizens.

After finishing the 1st year, in 1985, several KazPTI students, including me, were called to the Soviet Army (initially served in the Primorsky Krai, later on Sakhalin Island). In 1987, after demobilization, we were all continued our education from the 2nd year of the same faculty.

At the initial stage of education as well as at the final stage, we were taught by well – qualified educators, like Flora Shabdanovna Madina (Higher mathematics), Ponomarev V.D. (Chemistry), Shakhanova R. (Russian language), Malenovskaya V.D., Gudochkina L.M. (Paleontology), Rusanov B.I. (Mineralogy), and Kozhnazarov A. (Hydrogeology and Engineer geology department) and I recall the time with them with special feelings of warmth, gratefulness for understanding and patience, compassion for students, assistance in time of need, but also a strict demand to raise responsibility.

On the fourth and the fifth years, enthusiastic students, including me, simultaneously studied at the Military Department, after finishing it, we were given military ranks “lieutenant of reserve”.

All teachers and Institute as a whole, left only positive impressions in the memories of students of 80s. Teaching staff, having profound scientific knowledge, which was given to studying of students with diligence and professional approach, could make students love the occupation, develop the sense of patriotism, form the basis for becoming the professionals of their craft.

During the education, I occasionally used to go to the mountains, take samples of soil and water, rock samples for further study in the laboratory of the Institute. At the same time, students especially enjoyed the following subjects: “local geology”, based on the study of the structure of underground layers, ancient fauna and flora. Being interested by the science, these teachers were able to “inspire” students with their deep scientific knowledge, to arouse interest in the subjects being studied.

During the education, I was a group leader, coordinated by the organizing committee and in collaboration with colleagues, at the meeting considered issues of academic performance, discipline, and problematic aspects of social welfare. Together with group monitors (Mukhanov Sh., Aliyaskarov G. and others) we organized different cultural and leisure activities, including visits to theaters, museums, and the wellness center “Medeo”, participated in the annual music festival “Spring KazPTI” and so on.

As it is known, at that time the government payed a great attention to the youth study, making favourable conditions of living. Thus, each student could afford himself a flight in preferential terms (with a 50% discount of ticket price), I found a part-time job at my free time.

In 1991, after graduation from the institute, I was accepted, of course with stream of the university, to the work in Guryev hydrogeological expedition, as an engineer – geologist. In accordance with functional responsibilities, I dealt with design estimates for conducting engineering-geological surveys for industrial construction, presented reports in the subdivisions of the former Committee of Geology of the Ministry of Geology of the Kazakh SSR in Almaty and Aktobe (ZapKaznedra JSC). At the same time, with my participation, exploration work was carried out on the search and calculation of groundwater reserves for the needs of oil and gas companies (to maintain sub-formation pressure of wells, drilling deep oil wells), as well as for agriculture in the region.

In 1992 I was appointed as a leading engineer, and after two years, in January 1994 and the head of the Emba field hydrogeological party of Guriyev hydrogeological expedition.

After that, there was a sharp turning point in my life. In 1996 I was inducted for the work in the institution of the National Security Committee (KNB) of the Republic of Kazakhstan, where I worked for many years as the head of the department (Atyrau city). At the end of 2017, I retired and was enlisted in the reserve with the rank of colonel of national security. I was awarded the state anniversary medal "20 years of Independence of the Republic of Kazakhstan", and I have got a number of departmental awards.

Thus, knowledge obtained within the walls of KazPTI in geological exploration and oil and gas industries allowed to show myself as an expert and to a certain extent had a positive impact on my development, self-realization and career.

But here is an interesting thing: at the same year I was appointed for a job at “Atyrau Refinery” LLP as an adviser of the chief executive officer, subsequently appointed to the position of head of the corporate security department, where also one of the division’s tasks is to ensure the economic security of the enterprise.

Thus, knowledge obtained within the walls of KazPTI in geological exploration and oil and gas industries allowed to show myself as an expert and to a certain extent had a positive impact on my development, self-realization and career, also during the work in the NSC (KNB) of the Republic of Kazakhstan.

The university is one of the most appreciated universities in the country, has a huge scientific and practical potential, professional teaching staff. All these guarantees students a brilliant modern technical education.

The first course requires the most careful approach in instilling in students love for the chosen profession, adaptation to the educational process. At the same time, the first-year students themselves should make efforts to acquire and master new knowledge in order to become professionals in their field, be proud of their chosen profession, take a decent place in society and benefit the Fatherland.