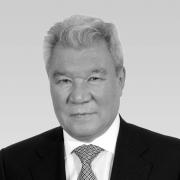 I entered the Mining faculty of Kazakh Mining and Metallurgical Institute (KazMMI) which was a primogenitor of present K.I. Satbayev Kazakh National Research Technical University (KazNRTU) in 1957. Desire to become a mining engineer (contrary to my father’s dream, because he saw me as an agronomist, livestock specialist or veterinarian and mother’s dream who wanted me to become a teacher) appeared in 1957 at the end of June when we went outside by bicycles and motorcycles after the graduation party. There is Tolagai Mountain in 10-12 km from Akzhar village. We climbed up and found the opening that could not have occurred naturally and a wooden cover with the ladders closed it. We, two people, dared to go down on two ladders, but as everything was shivered and creaked, we quickly climbed up. After that, my friend’s father told that geologists who found the coalfield worked there in 30-40s. Those words and what I had seen in the mountain became the base for my decision to become a specialist who is able to get from the earth all nature richness and fossil fuels. I felt that my place was where I would be able to understand the behavior of nature. I felt all complexity of the future profession without understanding. In the imagination of the 17-year-old young man from the village, the miner was an owner of underground pantries.

It is crucial that students should be able to think independently and creatively solve the set tasks as based on working environment.

During studies, I had an equal attitude to all disciplines, in terms of need to study them, but my favorite disciplines were conducted during the first two years – higher mathematics, chemistry, descriptive geometry, mechanical engineering technical drawing, resistance of materials, fundamentals of geology, a crystallography and mineralogy. Since the third year, my interests were concentrated on the following disciplines: "Machine parts", "Theory of Machines and Mechanisms", "Mining fundamentals" and especially "Systems of mineral deposits development". I found the given subjects necessary for me, because it made a basis for engineering knowledge. The disciplines were taught by talented outstanding constellation of experts – "Scientists from God".

I cannot say that some disciplines were harder for me than the other ones.I can say another thing – there were such disciplines which seemed to be boring when they were given as lectures in front of large amount of students (in this regard a practical training and laboratory works were much more interesting). Nevertheless, later, when we understood the discipline essence and began to be engaged in practical tasks, they became interesting. For example, "Political economy" or "Historical and dialectic materialism"; while turning to questions regarding theoretical bases application of capital flow and goods and their mutual influence on each other, or spiral society developmentand other conditions of social system which submitted to certain laws and could be foreseen.

Omirkhan Aymagambetovich Baykonurov, a unique personality who was surrounded by the team of wise mentors; they could see in us, in such different young people who came from a school bench, a factory or the Soviet Army, the equal colleagues. They were imparting to us love to our future profession and aspiration to learn invisible forces of underground elements. I have had sincere and unforgettable gratitude to Rector O.A. Baykonurov, and all the teachers and mentors after 62 years from the moment of entering institute. They grew up from us, ordinary people from all corners of Kazakhstan, the real engineering experts of a thorny profession of a miner.

KazMMI became a home for us from the first days because despite the shortage of hostels (in the first year most of us lived in private sectors renting a bed, there could be 7-8 people in one-two rooms of the house), we were involved not only in obligatory educational process, but also in public life without coercion. At the institute, we had a drama school, vocal-instrumental ensemble – the jazz band, that was well known to all Alma-Ata, led by future chief surveyor of Karaganda coal mines – the saxophonist Kulenov M.S. The technical study groups were connected with chemical and physical laboratories with explosive works and mechanical workshops, it helped not just with practical knowledge, but gave the chance to receive working specialty. Sports sections on cross-country skiing, track and field athletics, volleyball, basketball, free-style and Greco-Roman wrestling, sambo and judo helped us become physically stronger, overcome weariness and get energy for studying as well.

By the second year all of us received places in the hostel, began to study in new cabinets and laboratories of the present building of KazMMI, and we visibly felt care about us.

The annual paid internship (for example, I had a position of a pitman at "40 years of All-Union Leninist Young Communist League" mine in Leninogorsk, Pre-Caspian Mangyshlak Combine, a digger in “Novaya” mine site in Karaganda and floor hand at K. Liebknecht mine in Krivoy Rog, Ukraine). It is worth mentioning they provided us with the paid work in state and collective farms on reaping in Pavlodar and Kostanay regions. It gave the chance to receive necessary professions (driller, scraper, pitman, tractor operator, combine operator), to earn good money and relax in the open air.

Generally, the institute life was one of the happiest stages in my life. It was especially necessary for us, the young people, who saw the city for the first time, who stayed the first time far from their native places. All of us knew that there was not just the point of “study was necessary to us”, but we were aware of the fact that the institute also needed us.

My plans at the time of graduation were connected with full-time postgraduate study in which I stayed in my consent due to O.A. Baykonurov's recommendation, but a bit later, I left the postgraduate study and went to poly-metallic plant of Achisay as an over-man of “Zapadny” mine. The reason was the one: I was the eldest son in family and it was necessary to help parents with younger brothers and sisters.

The first months at work showed that the gained institute knowledge really corresponded to reality regarding technological support and production organization. And then being involved in initial steps of engineering work in underground conditions, and now after 57 years, during which I was climbing all career ladder, from the director of mining and concentrating poly-metallic Achisay and Irtysh plants that were the largest ones in the USSR, to Deputy minister of the industry and Deputy minister of geology and subsoil protection of independent Kazakhstan, I can say one thing: "The education got in KazMMI became the base on which success and confidence in decisions are based”.

On August 18, 2019, I will be 79 years old, but I continue to work though I reached a retirement age when I was 50 in 1990 according to the former labor legislation. Currently I work as an expert of “Kazakhmys Corporation” LLP, I am in charge of enterprise management, the given undertaking is the pride of our country, its main field Zhezkazgan was explored by the great son of Kazakhstan and the great scientist Kanysh Imantayevich Satpayev, geologist, economist, political scientist, expert on human souls. All scientific world and the engineering corps of geologists, miners, ore enrichment specialists, metallurgists are celebrating 120 anniversary of this great personality, and they sincerely say the words of infinite gratitude to him.

Knowledge gained at the institute, education in the spirit of respect for working-class people, for the profession, a constant positive example of the faculty that showed honesty, diligence, creative approach to task solving played a crucial role in my formation as a person and as an engineer.

Mining and accompanying, preceding and following it technological and production processes demand from experts who are interested in fruits of their labor, full devotion, possession of profound all-technical and professional knowledge, abilities to apply this knowledge in any practical situation, to be at the edge of events and not to stay on the side in difficult situations, to have consciousness of own responsibility and creative approach to solve the most trivial and daily tasks.

I have such qualities due to my institute at which from the first day teachers and my elder group mates formed mining engineers, literally sculpted engineers from each of us. Nobody is born to be an engineer but he or she become engineers at institute.

Mining does not define everything in life, but nothing can exist without mining.

In the modern world, future graduates have to correspond to that level of knowledge requirements that our profession dictates at all times despite the scale and state of scientific and technical progress.

It is crucial that students should be able to think independently and creatively solve the set tasks as based on working environment, sometimes there appear such problems that cannot be foreseen by a project, in such cases a specialist should act as an engineer at production. He has to be ready for continuous self-development and be able to make quick engineering decisions in constantly changing situation and mining-geological conditions, remembering about safety of life and health of the people that are entrusted to him, implementation of production timeline and ensuring high culture of production with break-even value.

In addition, you should remember that the great physicist, creator of Quantum theory of matter structure Max Planck said: "Mining does not define everything in life, but nothing can exist without mining".

There is still time for new discoveries by geologists who will shine on Kazakhstani map with the lights of new mines, factories, plants, and in our country’s economy, there will be a tangible contribution of current students to K.I. Satbayev KazNRTU - future production commanders.