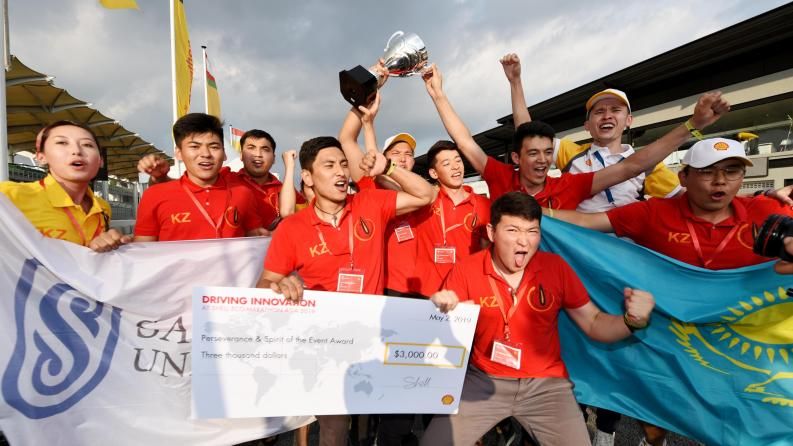 This year, the Asian Shell Eco marathon was held in Kuala Lumpur, the capital of Malaysia.  The team from Satbayev University-SU Racing Team took part in it for the second time. More than 100 teams from 18 countries in Asia and Oceania were represented in this competition. 2 teams participated from Kazakhstan: Almaty University of Energy and Communications and Satbayev University.

Shell Eco Marathon is an annual marathon, the purpose of which is to create cars on environmentally friendly and energy-efficient fuel, with its high economy. The three main stages of the marathon are held in different regions-in America, Europe and Asia. The winners of the main stages at the end of the year at the world championship in London at the Shell Eco Marathon Drivers World Championship reveal their winners.

SU Racing Team (SURT) participated in the Prototype Ethanol category with the Prototype Taiburyl 3.0 car. The car consists of an aluminum frame and a body made of carbon fiber. For the first time in 2018, a laboratory of Composite materials was opened in the University under the leadership of Alibek Ibrahim, created for the study and production of composite materials of any structure and complexity. It is equipped with an autoclave, a special furnace for post-curing of composite materials and the creation of prepregs. At the moment the laboratory works with such materials as carbon fiber, glass fiber, glass wool, Kevlar, prepreg. The creation of the body of carbon fiber allowed to reduce the total weight of the machine, which is taken into account in the international competition, and also facilitates its transportation to another country. Ethanol (Ethanol) was used as fuel.

At the Asian Shell Eco Marathon (2019), the team actually went in full force (11 people). Let me remind you that a year ago, at the previous marathon in Singapore, only 4 students participated. The team captain is Ibrahim Alibek. The main pilot of the team during the marathon for the first time was a girl, Zhaksylyk Ayaulym (4th year), and the second – Aysynov Zhandos.

(4 course). Responsible for the creation and design of the case was: Testicles Maksat and Amangeldinov Alisher, chassis – Ilyasov Asian for modeling and welding of the frame design – Sakiev Raw and Orazbekov Alikhan, the engine Kurbacher Rahimian, for the software and wiring – the head of Saga, for the purchase of all necessary parts – Amantay Erbol, modeling and the creation of a matrix is Kieran Makhash and Brasil Amanzhol.  The guys worked hard and amicably.

The marathon was held from 29 to 2 may 2019 at the famous Sepang circuit, which hosts the annual Formula 1 Grand Prix. According to the results of the competition, our team received a special prize of judges ' sympathy for loyalty to the team spirit-Perseverance & Spirit of the Event Award. At the closing of the marathon we were awarded a Cup and a Prize of $ 3000 (USA).

The victory at such a large international competition as the Asian Shell Eco marathon is an important achievement, a great success of Satbayev University, including students of the faculty of mechanical engineering and, more broadly, of our Republic. This victory is particularly significant this year, announced by the First President of Kazakhstan Nursultan Nazarbayev Year of youth. SURT is the first team from Kazakhstan to win in this category.

This marathon will be remembered for a long time for its unforgettable impressions and emotions. He gave us a lot of new friends. Here we got acquainted with the production technology of machines from other Asian countries and gained invaluable experience. Such large-scale projects teach children to work in a team, to work in a rapidly changing environment, in a short time to find solutions to both serious and momentary problems. It seems that our team will continue to take part in such prestigious competitions. We will have many more victories. We hope that the creation of machines on environmentally friendly fuel will contribute to the development of mechanical engineering in Kazakhstan.