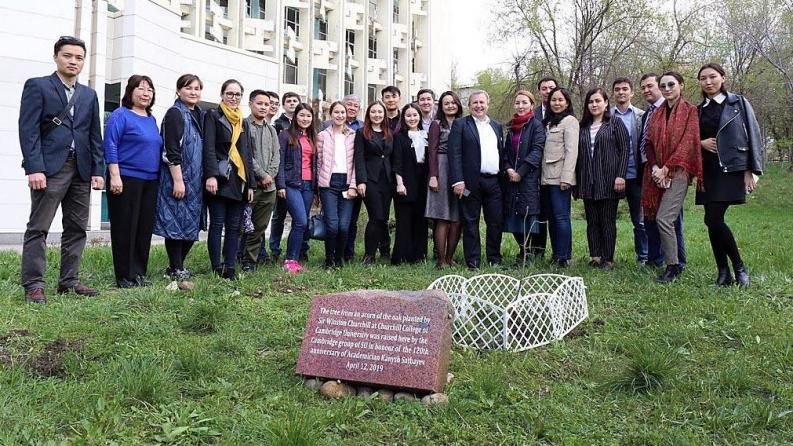 The event took place on April 12 and was timed to the 120th anniversary of Academician K.I. Satbayev whose birthday is the given date. In memory of this, a granite stone was engraved as well. This tree was grown from oak acorn planted by Sir Winston Churchill on Churchill College foundation day, Cambridge University in 1959. As it is known, Academician Kanysh Satbayev met with British Prime Minister, at that time, the leader of Conservative Party Sir W. Churchill in 1947, when K.I. Satbayev stated his famous expression “My people are above me”. Kanysh Imantayevich came to England as part of the USSR Supreme Council delegation.

“After getting introduced, it turned out that I was the first Kazakh that Churchill saw firsthand,” Satbayev recalled in the bosom of his family. Then Churchill asked, “Are other Kazakhs as tall as you are?” To which the academician immediately replied, “I am probably of the lowest height among the Kazakhs!” Everyone smiled, and he said, “My people are above me!”

The idea of ​​planting the “relative” of that oak in front of SU building belonged to Rinat Iskakov, Vice-Rector for Academic Work.

Satbayev University and Churchill College Cambridge University signed an agreement on training and advanced training of university staff and IT specialists. In the fall of 2014, a group of deans was trained there. Churchill's oak acorns were collected during the training period and planted by Rinat Maratovich in Almaty nursery in the spring of 2015.

“More than 80 administrative university staff, deans, teachers and IT specialists had unique trainings at Cambridge University. Experience, idea and spirit of Cambridge must be sprout on our land, within our university walls. It is symbolic that more than 70 years ago, Kanysh Satbayev visited England as part of the scientific delegation and personally met with W. Churchill”, Rinat Iskakov noted.